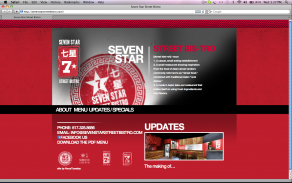 Catch Internet Pvt. Ltd., in collaboration with NeueTuesday, launches a site for Seven Star Street Bistro Restaurant. We built a very unique and custom wordpress site for the new eatery in Roslindale, MA.

Having grown up in the restaurant business, Christopher Lin, Joseph’s son developed a love of Chinese cuisine, and an attachment to the family atmosphere that the restaurant provided. After Seven Star Mandarin House closed its doors in the late 90’s it became his mission to one day revive the family business. Providing food was not only a family business, but a lifestyle. His passion for food expanded well beyond the doors of Seven Star Mandarin House. After completing culinary school at San Francisco’s California Culinary Academy, and years working in various restaurants throughout the country, Christopher decided the time had come to re-open Seven Star.